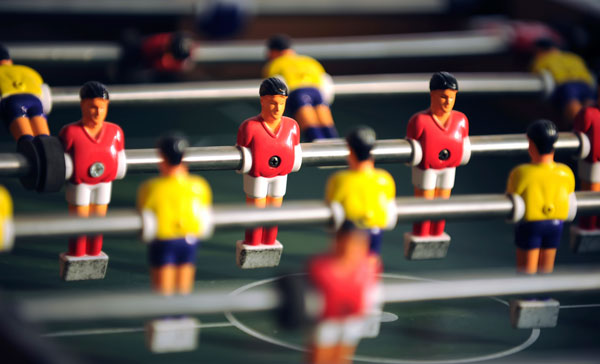 Whenever I start to think there is no limit to the crap I’ll watch just because it managed to get it on TV, I remind myself that I still only watch soccer every four years, which serves to reassure me that I do in fact maintain some minimal standards.

The World Cup first got my attention in 1994. I was living in Pasadena at the time, where the Rose Bowl happened to be the site of the final game. Since the soccer world had literally arrived at my doorstep, it seemed like humoring their little tournament was the polite-yet-arrogant American thing to do. The games turned out to be modestly entertaining (in a “what the hell else is on in June?” kind of way), but the sheer scale and spectacle of the all-night mega-party that spontaneously erupted on Colorado Blvd. after the Brazilians won it all was, in a word, “epic” (was waffling between “epic” and “booberific,” given the staggering amount of public displays witnessed that night, but am once again cowtowing to your delicate sensibilities… you uptight bastard).

That festive (easily could have used “booberific” here too… just sayin) indoctrination started me thinking. Maybe I was missing something? Maybe I’m not giving soccer a chance? Maybe I’d just uncovered a new means of meeting scores of exotic, inebriated women? (In 1994, pretty much every thought that crossed my noggin was contractually obligated to include a “meet women” rider… aw, who am I kidding… that rider is like any temporary tax that the government ever enacted, in that it’s still fully in effect.)

Twenty years and 5 tournament viewings later, my answers to the questions I posed back then remain “No,” “No,” and “Sadly, no, dammit!”

I’ll watch the World Cup (unless or until the NFL starts televising summer OTA’s and mini-camps, in which case the World Cup is on its own), but when it comes down to it… I just don’t “get” soccer.

Perhaps the futbol faithful are enamored by everything that takes place in the stands… the songs, chants, cheers, waves (Really world? We’re still doing that?), and general costumed wackiness. But is regularly having more going on in the crowd than on the field really the defense you want to mount? I know it’s “the world,” and that my duty as a ‘merican is to look down my nose at them, but I’m more inclined to remember that our forefathers were kicked out of every decent country in the world (think that’s my second Bill Murray/Stripes reference on this blog), and instead just suggest that the world might want to raise the sporting bar a little bit.

Of course the soccer fans could also be captivated by the grace, athleticism, and skill of the players. It is, after all, frequently referred to around the world as “the beautiful game.” I’m not going to suggest that there aren’t tremendous athletes and exhilarating moments (I am choosing to watch six week’s worth of it after all), but as far as I can tell, the most frequently employed skill is feigning a crippling injury at the slightest hint of contact. At what is supposed to be the apex of the sport, it is nothing short of embarrassing. The upside is that the rampant fakery and bad acting almost makes it OK that the US team isn’t a real contender.

Then there’s the World Cup trophy, that to me looks like a cross between something that was once a decent looking trophy, until somebody dropped it from a freeway overpass as a convoy of 18-wheelers were passing by, and the ceramic ash trays and vases regularly fashioned by ADD elementary school children. For crying out loud, it’s called the World Cup and what you hand over is not even a cup (I guess someone decided that “World Ambiguous Sculpture” lacked a certain cache) … and I’m supposed to take your sport seriously?

And if that weren’t bad enough, in just the matter of a few days this year’s World Cup has already gotten this song stuck in my head:

Despite it all, I’ll continue to watch. And root for Brazil. Sure they may take more dives than Jacques Cousteau, but they also have players whose entire names, as far as I can tell, are “Fred” and “Hulk”… and most important of all… their female fans are booberific!