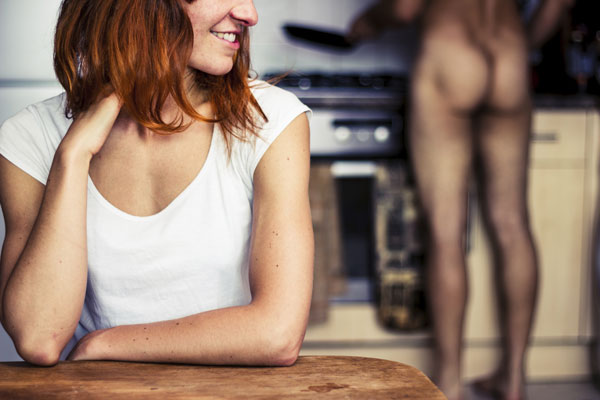 In my personal experience, there are three glaring errors/omissions in the “sausage for breakfast” (just threw in that title because it makes my inner 13 year-old boy giggle) scenario pictured above:

At least that’s how it usually unfolds in my kitchen. When there’s an actual woman there of course… which frankly isn’t the case nearly enough (burns to my nether regions notwithstanding). What gives? I, generally-speaking, have my shit together, am not typically aesthetically confused for a hideous troll, and know my way around a clothing-optional kitchen! Maybe I’m not dating the right women. Then again, maybe my butt doesn’t look anything like the one in the picture. Since it’s my blog, I’m gonna opt for the former explanation, and pish tosh the latter.

Basically, being terminally (not a formal diagnosis, but the evidence is pretty compelling) single means that at this point in my life, I’ve already been on more first dates than any otherwise functional human being should ever be made to endure (which is most certainly another post for another time). That dubious distinction probably ensures my eventual nomination to the “having absolutely no clue what women desire in a prospective mate” hall of fame, but while riding the lasting relationship short bus lo these many years, I have managed to form an opinion or two about what women don’t want, and why:

If I had a dollar for every time I was told what a nice guy I was as I was being shown the relationship door, I’d have considerably more dollars than I have today, though still not nearly as many dollars as I’d like to have, because such is the nature of having dollars and the associated tendency toward wanting more dollars than you already have… but I digress. And every time, along with the nice guy moniker comes the lovely parting gift, which is trying to fathom how and why you were so readily discarded, most often in favor of some jerk-wad with no redeeming qualities of any kind, time and again, by women who would vehemently insist what they really wanted was a nice, stable, normal guy.

As a result, for years I subscribed to the conventional wisdom (an oxymoron if ever there was one) that regardless of what they said, women simply could not resist the allure and challenge of the guy who clearly needed fixing. And the more flawed the man, the greater the female stampede in his direction. Heck, Information Discovery’s (aka the murder channel) programming is based entirely upon women making such horrible choices in men that divorce simply wouldn’t suffice…which was all the scientifical-ish proof I needed to join my fellow mate-less males in concluding that all women were batshit crazy (sorry to get all clinical with the terminology). Eventually, however, no amount of self-delusion as to my requiring no repair could keep me from confronting the frightening possibility that instead, womankind had figured out that all men are steaming piles of issues and behaviors in dire need of containment. And as such, the rather transparent shortcomings of the bad boy type might even be seen as far less daunting, and scary, than the potential Pandora’s box of unknown proportions hiding behind the facade of the unassuming nice guy types. After all, when the news crews are interviewing the neighbors of the whack job du jour, you can almost guarantee that sooner or later, somebody will say, “Well, he seemed like a nice guy.”

So once you kick aside the “woe is me” aspect of perennial unattachedness, the real revelation taken from decades in the dating trenches is the ongoing fallacy of attempting to generalize women in the same manner that we generalize men. Men are simpletons. Our instincts are base. Our minds are beyond easy to decode. It’s no great sociological leap to observe and report, “Guys like (whatever it may be),” and nail it for 90% of the male population. Women on the other hand, are not so easily homogenized. And it’s a mistake of epic proportions to try and do so. In short (which is a bizarre thing to type 800+ words later), we all agree that women are more complex, but for some reason we typically fail to recognize that as a result of that complexity, their stimuli and responses are, by definition, more individualized. When all is said and done, there is no “what women want,” and instead only, “what a woman wants.” Still every bit the monumental challenge to discern, but it gives even the terminally single guy hope that one of these times, he just might get it right.

Which is why if you’re a guy who has managed to find a woman who can actually stand the steaming pile that is you, you should thank your lucky stars and regularly devote time to figuring out anything and everything you can do to not screw it up. Otherwise you might find yourself right back in the unrelenting hell that is first dates… unless of course you have a great butt, in which case you’ll probably do just fine.