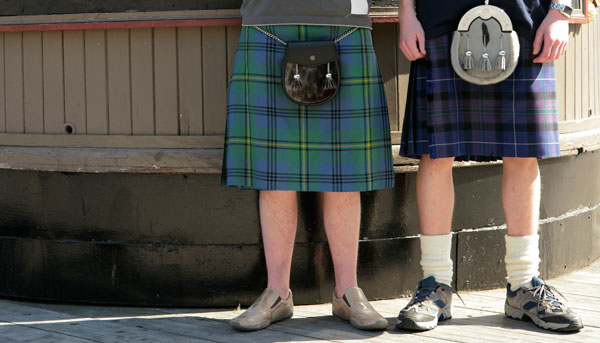 If you had just landed on the planet, with no prior knowledge, background, or context of humans, and were asked to use your superior intellect and interstellar logic to match a pair of pants and a skirt with the lower half of anatomically correct male and female bodies, who do you think ends up sporting the trousers?

Don’t get me wrong, despite having to periodically shift my man bits back into a quasi comfortable, or more accurately a less pinching, and thus less perilous position, I’m generally good with the fact that pants ended-up as a staple of men’s attire. On aesthetic grounds, there is no denying that women look infinitely better in skirts and dresses than men ever could (actually, they look better in pants too, but I’m trying to make a point here, so cut me some slacks already… Get it? Slacks). I’m not harboring any latent desires to cross-dress, I’m just saying that stuffing man parts into a pair of pants, as they have traditionally been engineered, defies a certain packaging logic. Some of us can’t help but wonder from time to time whether history somehow robbed us of the opportunity to roam free… in a manner of speaking.

Obviously, there was a time before the advent of pants when everyone was wild and swingin’ beneath various styles and types of draped fabric. Best as I can surmise from the extensive lack of research I’ve done on the subject, over time those ancient societies became annoyed and enraged with the propensity of men to repeatedly, “accidentally” flash their junk in public (because if you simply provide men the opportunity to display their goods, far too many will do so despite the fact that nobody asked them to or really wants to see that… the Internet and text messaging operate on the exact same premise today).

In the absence of “to catch a predator” television series and CSI testicle identification technologies, eventually some olden-world leaders, fearing further civil unrest would threaten their reigns, riches, and especially their being allowed to deflower brides-to-be, had no option but to approach some great inventor of the day (I’m guessing his name was something like Levi Pantalones or some such, though obviously it has been lost for all eternity) with a request that he find a way to put the kiabosh on the uncool dudes who were harshing the collective mellow and ruining things for all the other olden-days dudes just hangin’ out and enjoying the breezes (I’m paraphrasing, but fairly confident that I nailed the old-timey vernacular). A couple V-shaped slabs of fabric and some needle and thread later, pants as we know them were born… and there was much rejoicing.

What? You were expecting a resolution or revelation of some kind? Geez you’re demanding! How about: