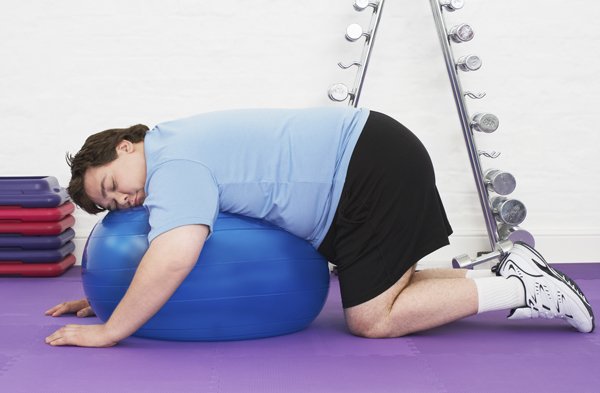 Who invented exercise? Probably the same sadistic jerkwad who developed the snooze button. To clarify, despite my being highly skilled in the role of useless lump, I’m all for activity that helps to keep me from turning into a giant tub of goo. But even so, somewhere along the way, tub of goo aversion activity went horribly awry.

As a child, we didn’t exercise. We played. And play kicked ass, even if most of what we played back then would shock the political correctness and awe the hyper-protectiveness of today’s parentals. Basically it was Lord of the Flies, just set in suburbia. But in activity and fitness terms, it was a hell of a good workout.

Eventually play gave way to sports (because at some point the lawlessness and mayhem of your childhood stops being cute, and starts becoming a matter of police involvement… but I digress). Sports also kicked ass… in fact it kicked play’s ass too, because you could whup on the other kids in public, and people actually came to watch and cheer the loosely controlled mayhem, and if that wasn’t enough, your triumphs over your peers were recorded and even awarded (this of course was back in the day when parents recognized that there was value in keeping score, and teaching that life does in fact produce wins and losses, and doesn’t just hand out accolades for showing up… but I’ll save the rest of that rant for another time… which means… you guessed it… I’ve digressed yet again. I’m starting to think that if I ever launch another blog, perhaps in tandem with the up and coming wordsmith Ernesto Jaimengway, it  should be titled “But I Digress”… but I digress). In activity and fitness terms, it simply didn’t get any better than sports.

The trouble was that as you moved up the sports ladder, practicing and playing the actual sport stopped being enough for the beer-bellied adults with crew cuts, loud whistles, and generally horrible fashion sense (we used to call them “coaches” though I’m not hep to what you kids call them today). Perhaps recognizing the severity of our athletic limitations (what can I say, we were mostly Caucasian), or just as likely due to circulation issues resulting from those polyester coaching shorts inhibiting their good sense, the coaches started herding us into weight rooms, and prescribing drills and exercises that may have mimicked the bio-mechanical actions required, but were stripped entirely of the spirit, activity, and play aspects of the sport. I hated that, but it was the price you had to pay to keep playing, so I became adept at doing the minimum required to get me out on the field of play.

It wasn’t until after being a small, slow, white guy finally caught up with me (technically speaking it was a collegiate defensive back who caught up with me and set me on a path to surgical knee reconstruction, but I maintain that you can correlate that directly to my being a small, slow, white guy, which surprise, surprise, is yet another digression) and the sports days were in the rear view (softball beer leagues notwithstanding, because they don’t really count as sports, rather they are more accurately described as public drunkenness and male bonding in matching outfits… you know what goes here), that I realized those coaches had been shills for the fitness industry all along, trying to get me hooked on a free taste of contraptions and concoctions that would be there, for a price, long after my sports days were over.

At first I unwittingly bought in. Of course it was the 80s, and fitness clubs were the place to be to meet (which really meant to ogle) women in spandex and leg warmers (at least during daylight hours, since at night you couldn’t swing a dead cat without hitting a woman in spandex and leg warmers. Apparently, women’s legs were really really cold back then. I also can’t help but wonder about the origin of the “swing a dead cat” phrase and be more than a little unsettled by the thought of a time and place where people in close proximity regularly wielded demised felines, but after last week’s fiasco I’m really trying to stay on point, so look it up yourself, dammit). But it wasn’t long before I acknowledged the reality that I wasn’t there for the exercise at all. I still hated the exercise.

Sure, they had my money (the promise of scantily clad women usually does), but they didn’t have me. Or so I tried to tell myself.

Decades have since passed and while I long ago swore off paying for gym memberships that I always stopped using within a few months, I’m still in the clutches of the fitness industry far more than I like to admit. For one, there’s the club quality elliptical in the studio out back that I begrudgingly hop on and curse 4 times a week. And I shudder to think about the money spent and drudgery experienced on it and all if its predecessors — various apparatus and methods promising phenomenal fitness results while primarily delivering the misery of use, followed by the guilt of eventual neglect. What’s worse, I still involuntarily pay attention when someone mentions the latest fitness gizmo, workout routine, or fad class, even as I know full well it is all crap designed to trim my physique by just trimming my wallet. I don’t fall for it or give in to it anymore, but I still loathe the fact that I’ll even entertain the sales pitch.

So in the end I just keep trudging out to that studio, still hating the exercise but accepting it as the price to pay for being a fit bastard instead of a fat one. Yet even as I’m resigned to that horrible fate, I can’t help but hold out hope that someone, somewhere will come up with a new sport for small, slow, and now old, white guys.

Not that anybody would want to watch or cheer for that, myself included.