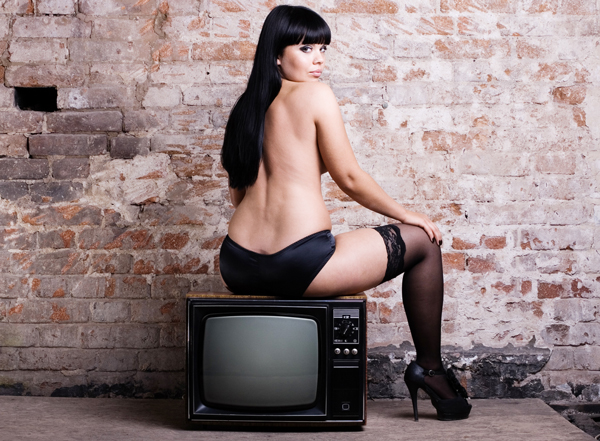 I watch way too much TV. Or perhaps I should clarify and say that I have the TV on in my house way too much. I’ve come to realize that when contemplating and confronting just how much television is a part of my day-to-day existence, I quickly point out to anyone who will listen that I’m rarely engaged and actively watching, and that its primarily kept on all the time for the sake of background noise. Really, most of the time I’m not even paying attention!

Of course, since I mostly live and work alone, the only one I’m actually telling that to is the dog, and he frankly either sees right through me and/or doesn’t seem much to care. But as you’ve now stumbled onto this page, either by accident or as the latest in a long  line of poor life choices, I’m getting to tell it to you too. You ultimately don’t have to care any more than the dog does, but if you’d at least refrain from licking your own junk while I’m addressing this topic (show off!), it would represent tremendous improvement from my typical audience response.

On the surface, the “television is just comforting white noise” argument sounds pretty good, and as far as rationalizations go, I’ve propped myself up many a time on far more flimsy ground. But it’s a convenient truth at best… more likely an incomplete, or completely misguided one. Because the beauty of TV, the essence of its warm glow, its tantalizing allure, is that even when devoted to “watching” TV, you don’t actually have to pay attention in any way, shape, or form. Surrounded and bombarded by our “hey, look at me!” society at every other turn, that’s kind of an attractive proposition these days.

Television is a seductress. A time- and life-sucking, soulless, unrelenting, unabashed, unapologetic, you had me at hello vixen. Sure there’s always the chance you’ll be mildly amused or momentarily entertained, but the real appeal… the lone guarantee… the true payoff… is the vegetated state where complex thought, and pretty much everything else above the baseline of human existence, takes a holiday. It’s glorious. It’s addictive. It’s also kind of sad because the overwhelming majority of what it’s shoving into your immobilized think-hole is absolute crap (the real genius of TV is that most of the time you’ve been rendered too stupid to even notice… but I digress).

Now before you youngins soil yourself or get your hashtags all in a bunch, I am aware of that thing called the Interwebs, and that we are all products of the era in which we were born and raised. You very well might insist that the Internet is the one true, unquestioned, time-sucking seductress. And I’m not even going to argue that the Internet isn’t uber hotness… a temptress of the highest order… the ultimate vamp, siren, enchantress… you name it. The Internet single-handedly made the need to keep (and subsequently feel guilty about keeping) a hidden porn stash obsolete, so I’m not saying anything bad about the Internet (at least within the confines of this post).

But it’s not the same. The Internet requires some amount of actually paying attention to what you’re doing, lest you end up on a Homeland Security watch list, or a person of interest in a probe of sexual predators (Gus life tip of the day: Whenever possible, avoid probes… you’re welcome), or worst of all, sucked-in and taking part in one of those penny auction sites.

To put it in proper perspective, when I’m actually watching TV in the evening, it is usually with my tablet at hand, perusing the Internet with only cursory awareness of the bad writing, acting, direction, and editing spewing from the television. Yet TV doesn’t get annoyed or upset with me and my transgressions at all! TV doesn’t get all up in your business and frankly, doesn’t even care if you’re simultaneously flirting and/or making googly eyes (suddenly wonder if that is how Google came to their moniker?… but I digress) at the much hotter Internet. TV is perfectly fine being your vegetated entertainment booty call or friend with benefits, while the Internet is going to be kind of prissy and demanding, is going to try and change you, and most likely will also try and take you to the cleaners in the process.

And as long as we’re making relationship analogies, “reading” is the partner you really should be, and belong with all along… the unassuming and quiet one who nurtures, supports, and  challenges you to be better… but of course as is too often the case, also the one who you regularly overlook, dismiss and/or cast aside all to easily in favor of purely prurient, yet vacuous pursuits (you really are a sleazeball, but of course I mean that in the best possible way)…. but I digress.

When all is said and done, I’d like to think, or at least hope, that I get something more out of TV than a temporary lobotomized state, but if I’m honest with myself, that’s really about all there is to it. Of course if I could actually find something remotely good on any of these 300+ useless channels, it might be a different story altogether!